It was a bank holiday today. We got up and got ready, then got in the car and drove down to Mandurah (pronounced mandra, more or less). We detoured to check out where the dolphin boat went from and then went to Janice’s house to say hello to everyone.

Joshua and Charlie (the dog) were both very excited about each others’ presence, in very different ways. Charlie was just generally very happy to see new people and so was running around and sniffing everyone, whereas Josh kept trying to run away from Charlie, which just increased the canines need to get close to him. They continued in this way for most of the visit!

Our boat trip was booked for 12 so we headed out and got there almost exactly on time. The ride lasted for about an hour and a half and we were taken all round Mandurah, which has parts a bit like Venice and other bits a bit like Sandbanks in Dorset. The sort of place you could imagine retiring to with fantastic (expensive) houses along the edges of the water, massive boats moored all over the place and lots of coffee shops. You can see some of the houses in the picture of the two dolphins below.

Deanne took some pictures on our proper camera but these ones are just from my phone and probably not super-successful. The second one is Deanne and Joshua on the boat. Josh sat on our knees for most of the trip and was pretty well behaved.

When we got back to Jan’s it was lunch time and we all ate far too much food and chatted. Of particular note (although I may be biased) was the chocolate cake Deanne had made especially for the occasion. But it was all really nice.

On the way home Joshy slept for a while in his car seat. After getting back we finally removed his dinosaur from the water, it’s a Minmi paravertebra, which is a kind of Australian ankylosaur. We’re going to take it with us tomorrow to Bob’s so he can take a look, as he was incredibly interested in what was going to happen after we put it in the water. 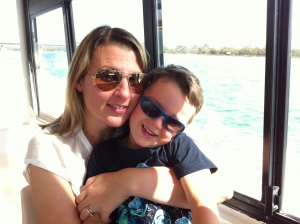 One response to “Day Out”